Mount Kenya National Park is located in the Eastern part of the Great Rift Valley, about 175kms Northeast of Nairobi capital city. It was founded in 1949 and it is remarkably one of the most magnificent parks in Kenya. Its establishment was primarily to safeguard Mount Kenya, diverse wildlife and surrounding areas that make up the numerous habitats for its various wildlife species. It sits in an area of 715sq.kms and it takes its name from Mount Kenya-the second highest mountain in Africa. Mount Kenya is an extinct mountain and it stands at an elevation of 6000m with its glacier-clad summits straddling at only 16kms south of the Equator.

Mount Kenya National Park’s history can be traced back when it was originally designated as a forest reserve prior to becoming a national park. Today, the park features among the most exceptional destinations in Kenya with a lot more to offer the world. It was set as a UNESCO Biosphere Reserve in 1978 and the park incorporates the forest reserve. The park was founded mainly to preserve its amazing beauty, biodiversity and water catchment areas for surrounding areas. It expands up to 715sq.kms and sits at an elevation of 3000m and the forest reserve 705sq.kms. Both the forest reserve and UNESCO World Heritage Site occupy an area of 1420sq.kms.

Mount Kenya is an extinct volcano and Africa’s second-highest mountain. It is an iconic attraction in Mount Kenya National Park. It occupies about half of the protected area and it can take hikers 3-5 days to make a complete hike.

Mount Kenya National Park also features unique vegetation and it ranges depending on the elevation. The montane forest ranges within 2000m, timberline forest are between 3000 and 3500m, the bamboo forest is in the middle, heathland and chaparral between 3200 and 3800m, the afro-alpine zone begins from 3500-4500m, Nival zone is above 4500m. The open savanna grassland makes up the cultivated zone.

Mount Kenya National Park is an incredible birding site that is worth exploring on Kenya safari. There are an estimated 160 bird species to identify including the threatened and unique Abbott’s starling.

Hiking through Mount Kenya is by far a major activity and one reason most visitors on Kenya safari visit Mount Kenya National Reserve. Hikers can start their hikes through anyone of 7 various routes and the simplest is considered to be Naro Moru. Others include Timau, Burguret, Nelion, Sirimon, Chogoria, and Batian.

The weather and climatic conditions in Mount Kenya National Reserve are favorable all year-round. The wet season in this park occurs starting March, April, May, and October, November, December. The dry months of the year begin from December, January, and February to early March.

The available accommodation options for visitors on Kenya safari to spend a night in Mount Kenya National Reserve range from budget to luxury. They include huts such as Mackinders Hut, Judmare Hut, Austrian Hut, Liki North Hut, and many others. The Bandas include Warden’s Cottage, Sirimon Bandas while the lodges include Rutundu Fishes Lodge, Mountain Lodge.

Visitors can reach Mount Kenya National Reserve within 175km drive from Nairobi capital city. One may also use a shuttle or public taxi and set off via the Nanyuki-Isiolo route. Or drive through Chogoria along Embu-Meru about 150kms North of Nairobi. Alternatively, one may opt for domestic flight services from Nairobi to Nanyuki airstrip from where they can be picked up by your safari guide. 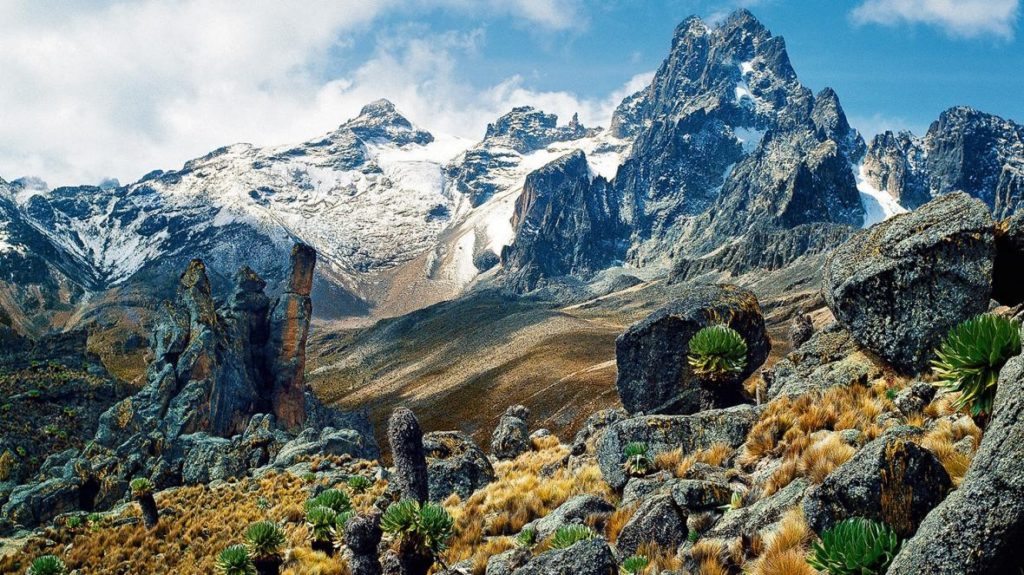 Aberdare National Park is set within the Aberdare Mountain Range, Central Kenya-East of the East African Rift Valley. It was gazetted as a national park in 1950 and occupies an area of 767sq.kms. It sits between elevation 2000 and 4000m. Its landscape is unique, consisting of mountain peaks that rise up to 4000m to V-Shaped valleys intersected by rivers. View Details