Lying approximately 300kms south of the Equator crossing, Kilimanjaro National Park is undoubtedly one of the most magical Tanzania safari destinations. It derives its name from the magnificent Mount Kilimanjaro which itself it an outstanding safari site to explore on Tanzania safari. This park is set near Moshi Town in the Northern side of Tanzania above the rolling hills and plateau of Amboseli National Park. It established as a national park in 1973 and extends to cover an area of about 1688sq.kms. Like other safari parks in Tanzania, Kilimanjaro National Park is under the management of Tanzania National Parks Authority.

This park is home to an estimate of 140 mammal species and Tanzania wildlife safari here involves sighting wildlife species such as leopards, cape buffaloes and these can easily be sighted in the park’s montane forest, moorland, and grassland. Elephants can be spotted around Tarakia and Namwai Rivers, the Kilimanjaro tree hyrax, grey duikers, primates such as blue monkeys, bushbabies, western black and white colobus monkeys. You will also come across diverse butterfly species, tree frogs as well as Jackson’s three-horned chameleon and the 2 horned chameleons.

Mount Kilimanjaro is of no doubt iconic attraction not only in Tanzania but East Africa at large. This magnificent volcano consists of 3 scenic volcanic cones (Shira cone, Mawenzi, and Kibo volcano cone). Compared to other volcanoes in Africa, Kilimanjaro is a dormant volcano and it is rated as Africa’s highest mountain and the highest single free-standing mountain on planet earth. It positioned between elevation 5895m and 4900m from its plateau baseline. Hiking to its summit rewards travels endeavors with a breathtaking view of its scenic glaciers.

The vegetation of Kilimanjaro National Park

Kilimanjaro National Park is comprised of 4 distinct vegetation zones and each zone hosts diverse plants and wildlife. The vegetation here ranges depending on elevation whereby from 1800-3000m it is mainly an evergreen rainforest, vascular plant species, and the common forest trees; between elevation 4000 and 5000m it is the alpine zone, the glacier is mainly at an elevation of 5000m. Heath and Moorland exist at elevation 2800m.

Activities to do in Kilimanjaro National Park

Climbing to the summit of Mount Kilimanjaro is probably one major reason why most tourists visit this park. The routes to take on while on a hike to Mount Kilimanjaro include Lemosho, Umbwe, Kilema, and Machame. At the summit of this magnificent volcano, you stand a chance to explore the twin peaks-Mawezi and Kibo at altitude 5149m and Shira at 3962m.

If you love bird watching, a visit to Kilimanjaro National Park this coming holiday on Tanzania safari is worth your time. Birding in this park is so rewarding with astonishing bird sights such as the white-necked raven, the African fish eagles, Gabar goshawk, long-tailed trogon, grey hornbill, fish eagles, Ruppell’s robin chat, yellow beneath, blue napped mousebirds, resident black-shouldered kite, white-cheeked barbet, green Hartlaub’s turacos, the common bulbul, African pygmy kingfisher. To make your birding experience successful and memorable, make sure you pack binoculars and cameras.

Discover how Kilimanjaro National Park is gifted by nature by embarking on a guided nature walk. While on a nature walk, you have the opportunity to come across diverse wildlife, primates like baboons, red-tailed monkeys, black and white colobus monkeys; plants, birds.

Cycling is another unique way to uncover what this park holds for the world. There are 3 stations where cycling always starts from and each offers an amazing view of the vast farmlands and surrounding areas of the Chagga residents.

Hiking or climbing in Mountain Kilimanjaro National Park is best done in June, July, August, September, October and December, January, Mid-March. The wet months which start in April, May, and November are ideal for bird watching.

Where to stay in Kilimanjaro National Park

Getting to Kilimanjaro National Park

By road, visitors on Tanzania safari can reach Kilimanjaro National Park starting from Arusha Town then drive to Moshi Town which is 123kms away and connect to Marangu which park’s headquarters on Moshi side about 48kms. By air, visitors can fly up to Kilimanjaro International Airport and then drive to the park within 1 hour and 30 minutes (approximately 80kms). 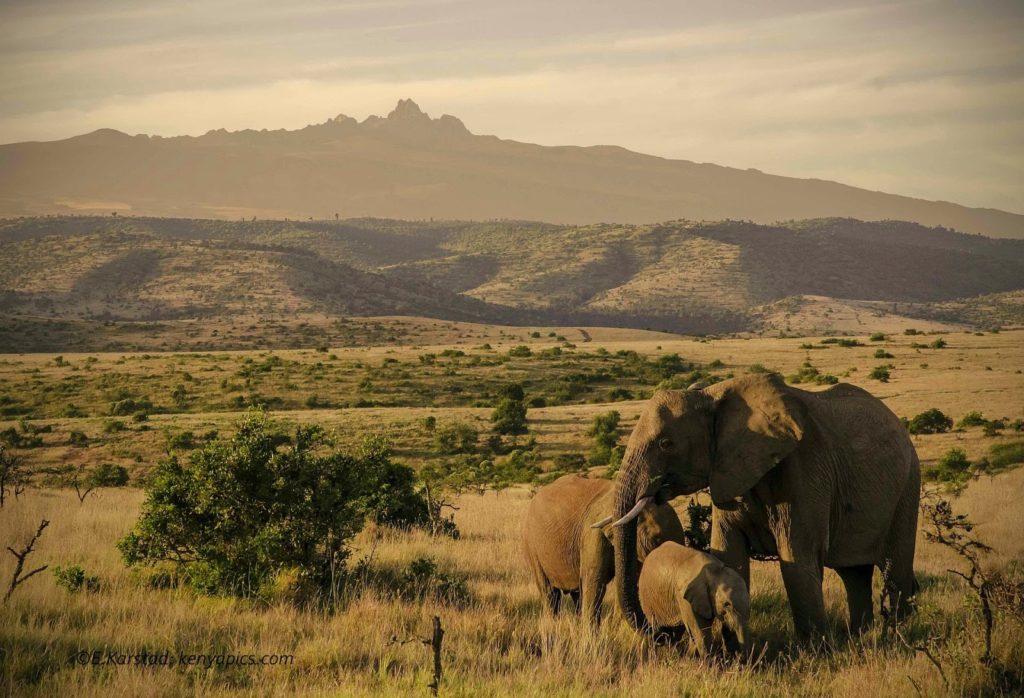