Serengeti National Park is remarkably one of the oldest and the most popular national parks in the world. This protected area lies between the Mara and Simiyu region of Tanzania. It was founded in 1951 and in 1979, it was designated as UNESCO World Heritage Site. Serengeti National Park sits in an area of about 15000sq.km and it largely consists of woodland, grassland plains of Ndutu in the Southern Serengeti, Lakes which make up the Serengeti Ecosystem.

This park isn’t only famous for its endless plains but also for the gigantic wildebeest migration where nearly 1.5 million wildebeest and thousands of zebras migrate in search of what to feed on and water to drink. Serengeti National Park can be divided into 3 sections-the Southern regions which are also termed as Serengit denoting the land of endless plains; the Western corridor which is characterized by forests, dense bush, and Grumeti River while the Northern section, Lobo area connect with Masai Mara National Reserve of Kenya.

The history of Serengeti National Park can be traced back to 200 years when the Masai turned the open Eastern Mara region their grazing area. They described it as the ‘endless plains’ and this follows a visit by Austrian Oscar Baumann’s in the region around 1892. The word Serengeti was used by the Masai to mean the place where the land runs on forever.

Steward Edward White became the first American to visit enter Serengeti and he went ahead to record his exploration in the Northern area of Serengeti around 1913. He came back to Serengeti in the 1920s and camped around Seronera for about 90days. At the time, he and his colleagues shot about 50 lions. It was because of hunting lions that reduced their population and that is why the area was partially designated as a game reserve and occupied an area of 3.2sq.kms in 1921. It was later established as a reserve in 1929 and in 1951, it was turned into a national park.

Activities to do in Serengeti National Park

The wildebeest migration is probably the major reason most tourists embark on Tanzania safari in Serengeti National Park. It is such an astonishing wildlife safari experience that takes place once in a year. Over 1.5 million wildebeests plus gazelles and zebras can be spotted migrating in search of what to feed on and drinking water.

Birding in Serengeti National Park is a great opportunity for you to spot out the diversity of bird species including among others the Ashy starling, crowned cranes, Southern ground hornbill, marabou stork, lesser flamingos, helmeted guinea fowl, Kori bustards, red and yellow barbets, fisher’s lovebird, Hartlaub’s turaco, Masai ostriches. Tourists on birding tours in this park are advised to come along with a pair of binoculars and cameras.

Guided nature walks in Serengeti National Park provide insight into the park’s natural wonders. It allows you sight several birds, wildlife, plants and many more. The park features diverse habitats, each with distinct creatures for you to explore.

Hot air balloon tour in Serengeti National Park is a rare wildlife experience where visitors catch a glimpse of the park’s diverse wildlife while above the ground instead of being in the safari vehicle. Visitors have the opportunity to see several savanna dwellers including giraffes, elephants, lions, rhinos, buffaloes, antelopes, spotted hyenas, cheetahs, golden wolf, serval, leopards, striped hyenas, wildebeests, birds to mention but a few.
The other safari activities you can engage while on Tanzania safari in Serengeti National Park picnicking tours, camping, and cultural tours.

Serengeti National Reserve can be visited at any time of the year. To witness the wildebeest migration, Serengeti National Park is best to visit between December and July. In case you are interested in spotting predators, the best months to visit this park are June, July, August, September, and October. 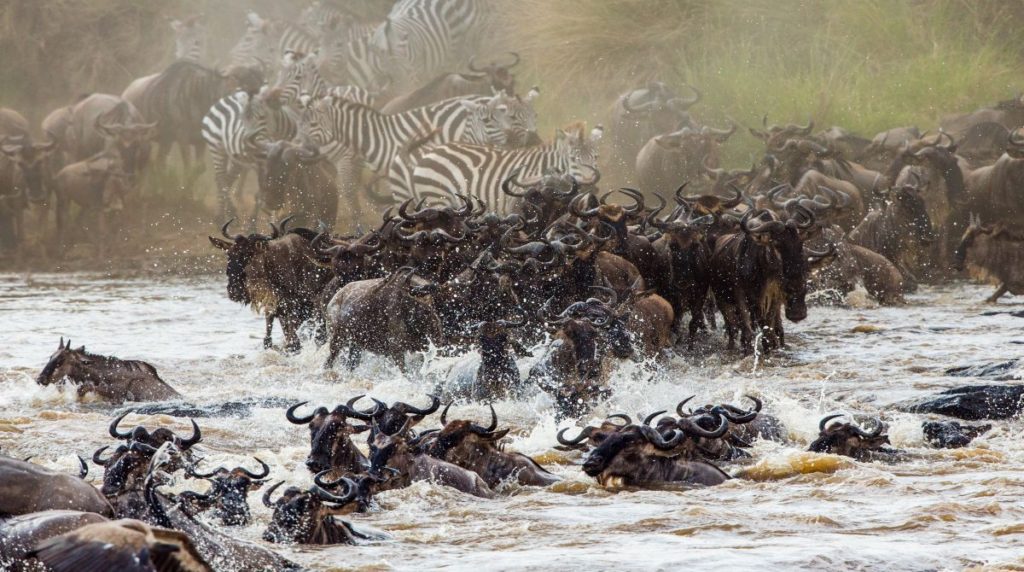 Arusha National Park is rated among the smallest parks in Tanzania and it lies in the Northeastern side of the country. It is 25kms from Arusha, 58kms away from Moshi Town and 35kms from Kilimanjaro International Airport. Despite its size, this park is by far that one most unusual wilderness area to consider a must-visit on Tanzania safari. It was founded in 1960. View Details Here