Murchison Falls National Park is the only national park in Northwestern Uganda and also the largest of all the 10 national parks in Uganda. This protected area lies in the Southwestern districts of Nwoya, Masindi, Buliisa, and Kiryandongo approximately 4-5 hours’ drive away from Kampala capital city. It takes its name from Murchison Falls, one of the world’s powerful waterfalls which squeezes itself in a narrow gorge of about 7 meters prior to plunging about 43m down.

Murchison Falls National Park was designated as a national park in 1952 making it one of the oldest national parks in Uganda. It extends to cover an area of about 3840sq.kms and forms part of the extensive Murchison Falls Conservation Area which also covers Bugungu Wildlife Reserve, Karuma Wildlife Reserve and Budongo Forest Reserve. Its strategic location lets visitors on Uganda safari also explore the Ziwa Rhino Sanctuary en-route from Kampala/Entebbe. This park is bisected by the Victoria Nile which joins Lake Albert and it is by far an exceptional Uganda safari destination.

Murchison Falls National Park history can be traced back to 1862 when John Speke and James Grant became the first Europeans to visit the now Murchison Falls Conservation Area. Later, between 1863 and 1864, Samuel and Florence Baker had an in-depth exploration of this protected area and it was during their time that now Murchison Falls was named after Roderick Murchison the then president of the Royal Geographical Society.

From 1907 to 1912, occupants of about 13000sq.kms were displaced as a result of sleeping sickness which was spread by tsetse flies. Around 1910, the Bunyoro Game Reserve was established South of the River Nile and from 1928, the boundaries of this protected area were extended to cover the Northern side of the River that is on the side of the Nwoya district.

It was in 1952 that it was designated a national park by the British Administration and this was under the National Parks Act of Uganda. Today, Murchison Falls National Park is of no doubt one of Uganda’s premier wilderness safari destination visitors on Uganda safari should consider a must-visit for authentic African wilderness experiences.

Other tourist activities to do in Murchison Falls National Park

Game drives in Murchison Falls National Park are exciting and offer visitors to Uganda safari memorable experiences. In your comfortable 4×4 safari vehicle plus safari guide, you will drive via the Northern track where you should expect to sight wildlife species such as African bush elephants, cape buffaloes, lions, leopards-if you are lucky enough, warthogs, giraffes, antelopes, birds, and many others. Your wildlife safari experience may last for you about 2-3 hours and you can opt for a morning game drive or afternoon game drive. 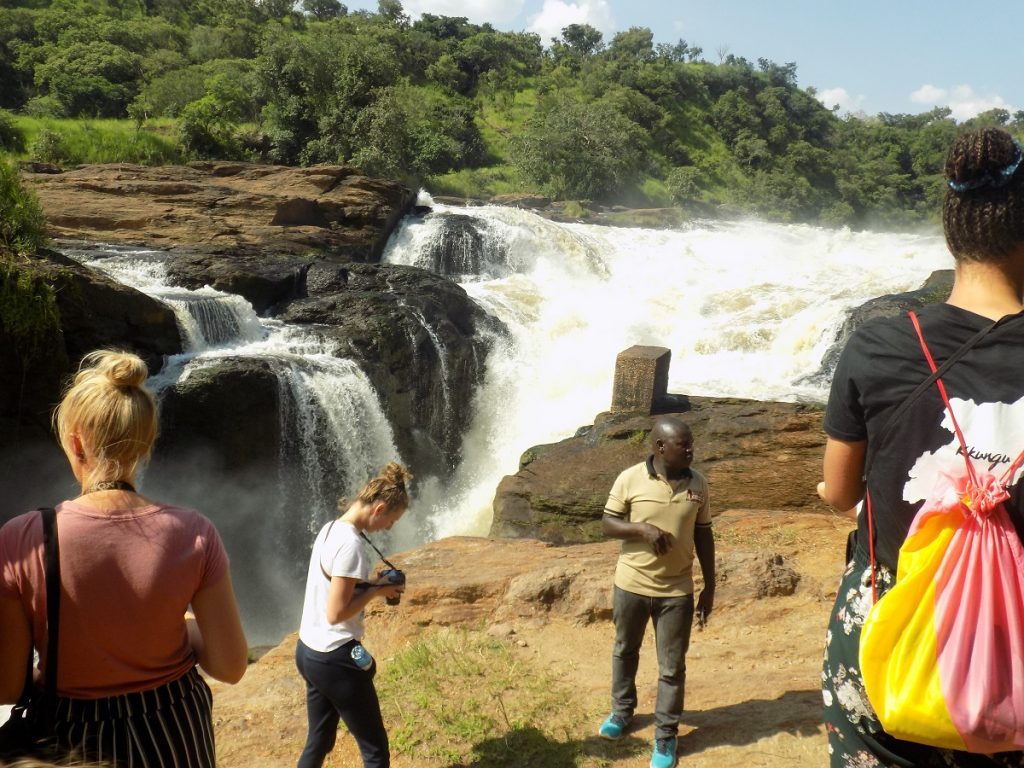 Boat trips in Murchison Falls National Park take visitors on Uganda wildlife safari to the bottom of Murchison Falls. This is exciting watersport worth taking part in Uganda safari for you to uncover the untold wealth of aquatic life in this park including water birds such as pied kingfishers, fish eagles, bee-eaters, saddle-billed storks and many more as well as view hippos, basking Nile crocodiles. You can decide to disembark and take a hike to the top of Murchison Falls along the designated trail for you to witness the waterfalls as it squeezes itself in a narrow gorge of about 7 meters prior to breaking off about 43m down forming a permanent rainbow and thunderous roar.

The best way to explore Murchison Falls is by taking a boat and disembark a point where you will set off on a hike to the top to view this wonderful natural wonder Uganda is gifted with. The hike to the top of Murchison Falls can last for you about 1 hour and 30 minutes and on arrival, witness it as it squeezes itself in a narrow gorge, take pictures and later, return on a boat or meet your safari guide waiting for you to drive back to your lodge.

Chimpanzee tracking in Murchison Falls Park is conducted in Budongo Forest. Trekking chimpanzees in the wild in this forest reserve involves exploring their behaviors, taking pictures and also comes with amazing sights of other primates including the red-tailed monkeys, olive baboons, black and white colobus monkeys, birds and many others.

Aside from game viewing, Murchison Falls Park is also perfect for sport fishing and for enthusiastic anglers on Uganda safari, it is one destination to consider a must-visit. Sport-fishing is a challenging water sports experience that lets you challenge yourself with a heavy Nile perch however interested visitors should have a valid permit.

Murchison Falls Park and Queen Elizabeth National Park are the two magical parks where hot air balloon tours are conducted in Uganda. It is an incredible experience that lets you catch a glimpse of diverse wildlife species while in the air rather than in the 4×4 safari vehicle. Visitors also have the opportunity to view the scenic Lake Albert, Nile and other surrounding areas.

Guided nature walks in Murchison Falls Park are best carried out in Kaniyo-Pabidi forest and Rabongo Forest. Nature lovers get a chance to see a diversity of primates including red-tailed monkeys, black and white colobus monkeys, birds, butterflies and many more.

Murchison Falls Park is best to visit during the dry season for game viewing and this occurs starting June, July, August, September, and December, January, February. It is considered the peak or high season where a large number of visitors visit the park. Game viewing during the dry months is ideal in that the vegetation is not dense and offers clear views of wildlife species, birds. The wet season is perfect for bird watching and begins in March, April, May, and October, November. It is usually a breeding period for a variety of bird species thus offering incredible bird sights.

Lake Mburo National Park is by far Uganda’s most accessible safari park compared to other 9 national parks. It is shared amongst the western districts of Isingiro, Mbarara and Kiruhura, about 4 hours’ drive from Kampala city center and due to its close proximity to the city center, even travelers on Uganda safari with limited time have opportunity. View Details Here