The sanctuary happens to be a secure place for the endangered rhinos and the only place in Uganda where you can track rhinos on foot.

Rhinoceros populations at the sanctuary have continued to expand due to much protection from human and non-human predators as it is a goal for Ziwa Rhino Sanctuary in collaboration with Uganda Wildlife Authority and the Uganda Rhino Fund.

History: Uganda claimed a big number of rhinos in the 90s. Due to massive wars, poaching, and the mismanagement of their natural habitat, there was total extinction of both the Black Rhinoceros and the Northern white rhinoceros in Uganda in 1983.

Ziwa Rhino sanctuary was established in 2005 to reintroduce the white rhinoceroses to Uganda as its goal is to “build a sustainable rhinoceros population and relocate rhinos back to their original habitat in Uganda’s protected areas.

The sanctuary started with a total of 6 rhinos, 4 of them were bought from Solio Ranch Kenya and 2 were donated by Disney’s Animal Kingdom in Orlando, Florida, in the United States since then the population has been growing.

Park rangers and guards continue to watch over the sanctuary ensuring the security of animals. The sanctuary happens to be also home to over 40 mammals and reptilian species which include monkeys, antelopes, hippopotamuses, crocodiles, and very many bird species.

The on-foot rhino trekking is only accepted at Ziwa rhino sanctuary which happens to be the only place to see wild rhinos in Uganda and this activity is a once-in-a-lifetime opportunity that should not be missed on any tour to the pearl of Africa.

During trekking of white rhinos, well-trained rangers together with the guards will lead you through the bush to where the animals will be.

On spotting these magnificent animals in their natural habitat, you have to be more conscious and listen to the skilled ranger’s guidelines because rhinos happen to be more dangerous to humans.

Trekking involves watching rhinos on a close range and taking as many pictures as you can in not more than 3 hours.

The sanctuary also harbors a wide range of wildlife which you have to encounter during the trek. Waterbucks, bushbucks, oribis, Uganda kob, warthogs, and very many bird species will all be spotted on this 7000-hectare land.

For those who want to spend a night at the sanctuary, there is no worry since the lodges like Amuka safari lodge will make your stay memorable. The sanctuary also has a restaurant with nice staple foods which everyone wishes to taste.

While at the sanctuary, you can also take nature walks which can take half a day as you hike around the sanctuary spotting different wildlife. 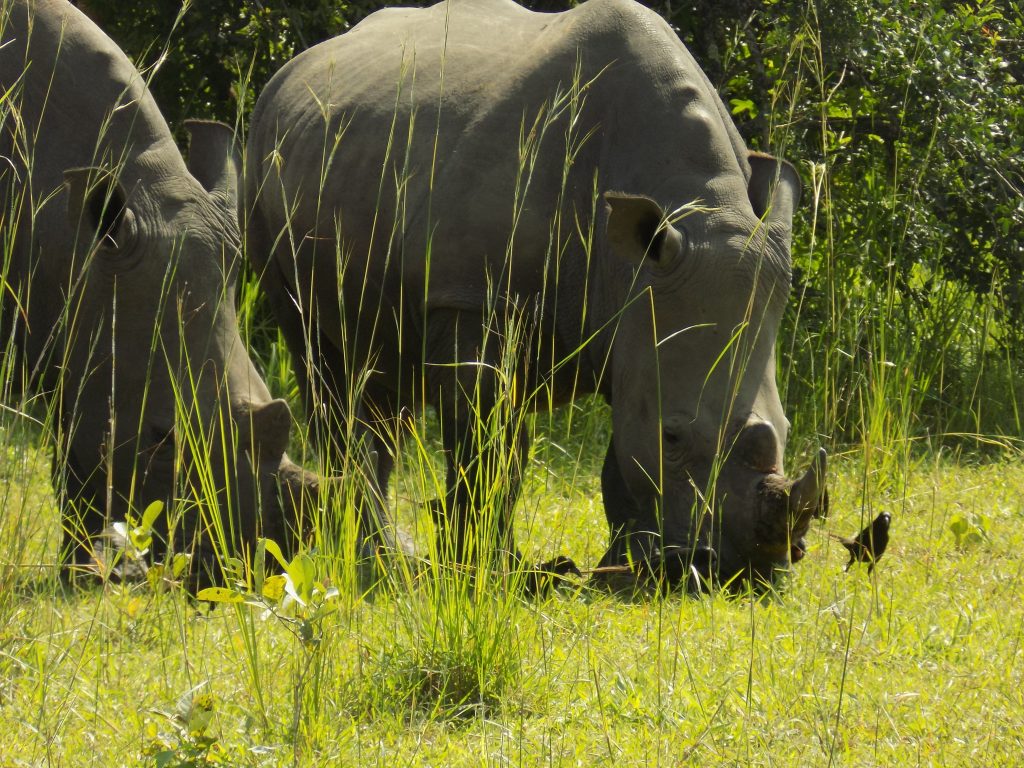 This 3 Days Murchison Falls Uganda Safari (short day tour) will take you to Uganda’s largest park known as Murchison Falls National Park, located in Northwestern Uganda on an area of about 3,840 sq. Km, gazette in 1926 as a game Reserve.

It is classified with savannah grassland, and the Victoria Nile that flows through separating it into (northern and southern bank). Book This Trip

4 Days Uganda Wildlife Safari to Ziwa Rhino Sanctuary (White Rhino Trekking) and Murchison Falls National Park (Wildlife Adventure in Uganda) Tour is one of the shortest trips but one where you will enjoy and see the big 5 game and other animals available in the park.

The trip features a visit to Ziwa Rhino Sanctuary is the only place to find and see the rare rhinos in the wild in Uganda. Book This Trip